The first anime I ever watched was Astro Boy, but I was far too young to realize what it was. Instead, I am going to go back to the first anime that had an impact on my life. I know that may sound silly, having any tv show, especially a cartoon impact your life in any meaningful way. But, this was in fact the case for me. 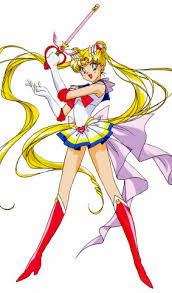 As a child, I always did like to draw. In grade six, Sailor Moon (even the horribly dubbed Dic version) was the first time I really sat down and tried to imitate a style with such loyalty. When the network moved the time slot my grandparents taped it for me (this was back in the day of VHS cassettes!) and I would pause the tape so I could draw the scene. I also started collecting the cards so I could draw all the characters without pausing the tape.

I was getting really good at it! By the end of grade nine I knew that I either wanted to pursue science or art. In high school, I took as many art and science classes as I could. My school even offered an animation class that I was fortunate enough to take! By graduation, I knew I wanted to be an animator. I even applied at Sheridan, the school you want to attend in Canada if you want to do animation. It was not to be, and I ended up going to the local college to take graphic design, and that is what i have been doing since. Long story short, I can thank Sailor Moon for the career path I have taken.

Recently, there has been a huge move toward the Steampunk trend in the cosplay world. Go to any convention and you will see someone in Steampunk garb, and at least one vendor selling accessories with gears and brass all over them. I have to admit, I do really like the Steampunk theme. And for a while, I have been tossing around the idea of doing an outfit.

I have long wanted to make a Sailor Moon outfit, but it has been many years since I have had the figure to pull it off. I am a stickler for details and would have this compulsive desire to make the costume as authentic as possible. And the crescent moons should be on the tiara, not under the back of the skirt!

Then I saw an image that had been shared around Facebook. Someone had done a drawing of a steampunk Sailor Moon and Tuxedo Mask! I loved the fact that it was an alternate version, with a longer skirt. I began to look at each of the senshi. I hate wearing wigs, and a good Sailor Moon wig with the odango and pigtails is way more money than I want to spend on a wig! I have dark brown/died black hair that is currently shoulder length. With a bit of pinning up, I could pull off Mercury.

The mercury symbol was proving very difficult to find, and I couldn’t find a nice earthy blue in the fabric store. Mars is the male symbol, so that was much easier to find! And rusty earthy reds are everywhere right now, with fall and Christmas coming. So, Mars it is! I will have a partial up-do, to get away with having much shorter hair, and my skirt will cover my bum!