After that horrible first attempt at Christmas, I started over again in February. This time, I decided to build my own wire frame from scratch. I picked up a spool of cheap steel wire from the hardware store. I made sure it was stiff enough that it would hold it’s shape while I work.

I started with a hoop that fit comfortably around my head, like the band of a hat. I then glued an arc over the top of my head, joining the very front and the very back of the hoop. This would hold that hoop at the correct height on my head.

Once I had this basic interior size figured out, I could start building the exterior. Special note: After each session of work, I would test fit the helmet to make sure it still fit and was easy to put on and remove. This way, if anything was out of place, I could fix it before moving onto the next step. 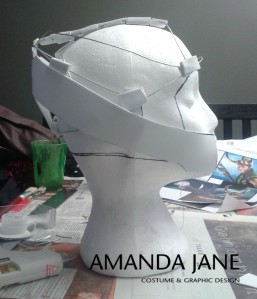 I cut six wires for the horns, three for each. These I curved into the shape I wanted, and glued together. I kept the bottom ends long, to secure them to the base.

To keep their shape, I started at the tip of each horn, working down toward the base, gluing pieces of foam in between the wires, like spacers. 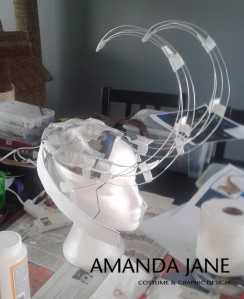 With the horns secure and somewhat solid in their shape, I glued them in place on the helmet. Using fabric to bridge some of the gaps, I glued everything together. The fabric provided strength where paper would not, but was more flexible than foam sheets.

With the basic shape now constructed out of wire, foam, and fabric, I could begin layering the paper mache.

The fronts of the horns were too angular, and I wanted to smooth them out. To do this, I cut strips of foam and glued them to the front face of each horn. This effectively rounded out the front without adding too much weight. 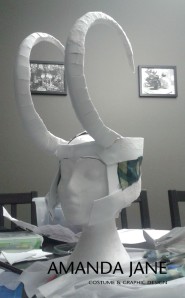 The next step is to keep layering paper mache over the wire/fabric/foam structure until the outer surface is smooth. More on that next time!

This project was off to a sad start as far as the iconic helmet goes. Before I started, I knew it was going to be tricky.

The design itself is very front heavy, and the horns would have to be hollow. I had seen a tutorial on how to make horns out of clay and paper mache. Basically, create the shape you want out of the clay, and let it harden. Then, paper mache over the clay, dry, remove from clay, and repeat. You end up with two identical horns. Great idea!

I bought a wire wreath from the craft store and trimmed it down, tapering one end so I would end up with a perfect circle segment. I also used a foam head to build the base of the helmet. 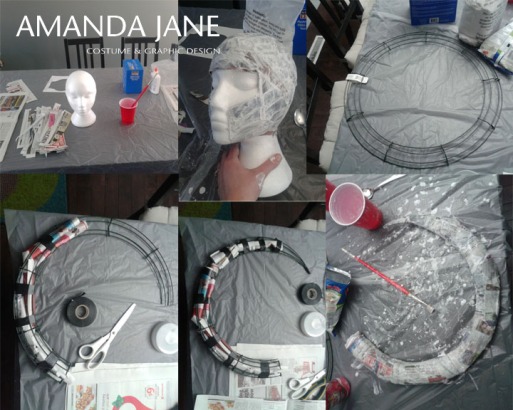 Problem number 1: The horns were huge. Enormous! Like two feet tall. If I wasn’t trying to go for as movie accurate as possible, I might have let it fly. After all, I am a far cry from Hiddleston’s more than 6ft frame, and could use all the help I could get!

Problem number 2: The horns were too circular. Again, if I wasn’t trying to replicate the helmet from the movie, I would have been happy with it, as long as both horns were the same.

Problem number 3: The head was too small. I tried to fix this by cutting down the middle (so I had two mirror image halves) and adding a strip to make the helmet wider. But it was still small, too round and bulbous, and downright awkward.

It was going to take too much work to fix these pieces, so they now sit in a cardboard box at the end of the table. I don’t have the heart to throw them away just yet, but they will inevitably head that way.

Take from this what you will. I don’t think there is anything wrong with this method in theory, and the failings were probably in the execution. This was my December/January, lost in a mess of paper, glue, and wire.

Several weeks ago, I began work on the new and improved Loki helmet, and it has been going much better. It involves drafting the general shape (from the inside out) in wire, and layering fabric and paper mache. I will go into more detail with that as I collect my photos and descriptions.